The model has been painted and just needs the decals applying before the weathering phase and I’ve used Mr Hobby paint for this as I did’nt want any of the ‘graining’ and roughness that I’ve experienced with Tamiya acrylics of late.
After undercoating with Games Workshop Chaos Black I sprayed the green first a couple of days ago using H303 FS34102. Most Mr Hobby colours are semi gloss but this one is’nt so I added a few drops of Tamiya X-22 Clear and straightaway I was getting a small amount of ‘frosting’ in a couple of places so I have’nt a clue what Tamiya have done to their paints but Mr Hobby will be the colour of choice in future. In case you think I’m making it up I sprayed some older Tamiya paint that I have in the stash and did’nt have ANY issues with it, also it’s noticeable how different the older paint smells to newer stuff.
The red brown was a mix of H406 Chocolate Brown, H72 Dark Earth and X-22 and this was sprayed using my Harder and Steenbeck Infinity that I have’nt used for ages, only because I’m waiting on a replacement seal for my Badger 100. The next colour was the sand so I used H79 Dark Yellow and it all went a bit wrong at this point as the paint went everywhere. For fine lines I really should have used an enamel based paint as I have had more control with overspray in the past for some reason. Anyway after attempting to spray the sand colour I went back over the red-brown and green areas as I kept the paint mixes in empty jars and this is the result; 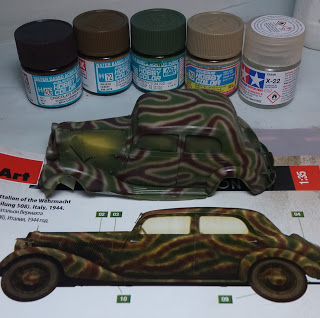 I’m quite pleased with that!