Well I just knew it was going too well.
I wanted to spray thinned Tamiya X-19 in between the wing ribs to give some tonal difference and thought about putting masking film over one of the roundels as it wouldn’t adhere as much as masking tape. Wrong! The vinyl pulled the decal away from the wing so I was left with air bubbles underneath it.
I tried Microsol to smooth it out, running some Johnsons Kleer under it to bed it down but ended up tearing the decal. In the end I tried matching paint to the decal with the idea of making masks and spraying the roundels myself.
That sort of worked but I was too quick to put the vinyl mask over the yellow paint and after lifting it I dug into the paint. I cleaned off the paint with a view to respraying the wing with Tamiya AS-12 which I did this morning however the AS-12 reacted with the paint underneath (or possibly the Alclad Aqua gloss) so the wing is being soaked in Mr Muscle oven cleaner as I type this and if it cleans up OK it will be resprayed again.
If it doesn’t I may have to write to Airfix to see if I can get a replacement wing and struts. Also I’m running low on AS-12 so the model may be repainted in another scheme, the problem with THAT is the scratchbuilt tail wheel will have to be removed as none of the other options on the decal sheet feature it.
To take something from this fuck up is that the first mistake I made was not sealing the decals with another coat of gloss varnish, if I had done that I wouldn’t be where I am now. 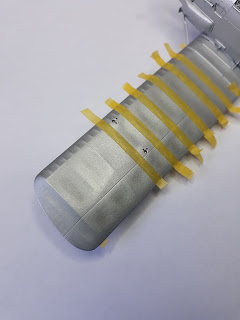 I can’t say I’m upset, just more frustrated with myself and my inability to put a model together without fucking it up somewhere. It’s not the kits, it’s just me and it makes me question sometimes why I do this for a hobby.

Where building models, is all we ever want to do!