Yet another one pulled from the Shelf-Of-Doom is this Fokker that I started last year and promptly messed up when it came to the wing. Since then I’ve had a think and made a slightly different approach to the finish.
After stripping the wing back to bare plastic I resprayed it with a white gloss from a Tamiya rattle can and left it to cure for a couple of days before spraying the other side, again leaving it to set completely.
As the particular aircraft I want to model had a white strip around the wing edges top and bottom I masked off the wing using Tamiya tape cut to 1mm width; 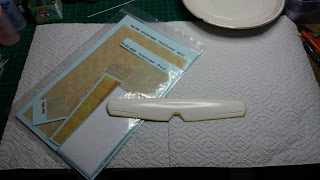 Luckily after the last failed attempt of doing the wing I had plenty of wood grain decal from Uschi Van Der Rosten left so this was applied both sides span-wise and done in three sections; outer wings, centre section and ailerons (which had the grain chord-wise). A brand new scalpel blade was used to cut the decal around the masking tape; 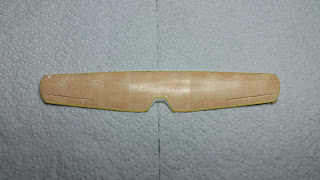 The decals are VERY thin and extreme care is needed during application as they are very easy to rip, something I did in a couple of areas as you can see in the picture above and the reason I had kitchen towel underneath.
For painting I decided to use Winsor and Newton acrylic paint rather than oils with Vallejo acrylic retardent to slow down the drying time; 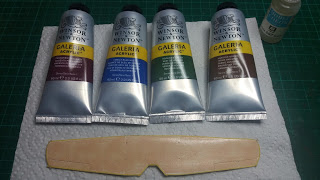 The underside colours were painted first, keeping the paint fairly thin to achieve the streaking effect that was a characteristic of this particular aircraft; 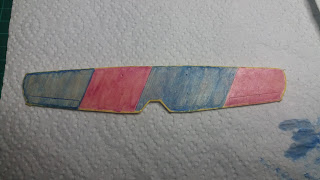 Due to the quick drying time I was able to paint the top surface then remove the tape, taking a LOT of care not to rip the woodgrain decal; 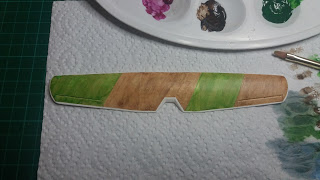 And that’s that! Finally!! The wing will be gloss varnished next along with the fuselage and the decals for the markings will be applied and hopefully I can get this finished as it’s been a very long time since I had a WW1 aircraft on the shelf.
I still would have preferred the wing in an overall green finish though….