I have’nt been able to do much for a while but I was able to get at the bench tonight so here’s a shot of the SS-23 missile finished, I just have to build the rest of the vehicle now. Obviously I can’t post too much as this is destined to go in Model Miltary International in the near future but I will show some stuff on the way; 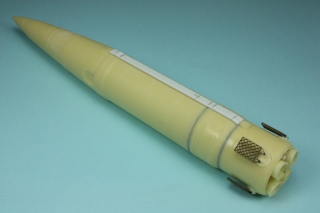 So far so good but there are some areas that need improving. I would just like to say thank you to Trumpeter who announced a 1/35 injection moulded kit of the SS-23 a couple of days after I started this one…you bastards! :o)

Where building models, is all we ever want to do!